I lived my third-grade year in Clarksville, Tennessee, an army town dominated then by the presence of Fort Campbell, Kentucky and the 101st Airborne Division, the Screaming Eagles, one of the most storied units in American military history. On Sunday afternoons, especially when company came into town like Uncle Vance and Aunt Hazel, we’d go out after church to the base where paratroopers would jump out of planes and land on a field where visitors could come and watch. It was cheap entertainment. 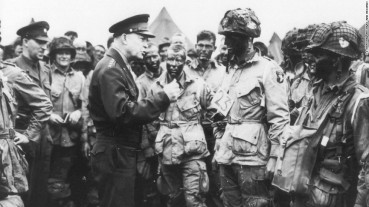 Then we’d go to the military museum, the Don F. Pratt Memorial Museum.  General Don Forrester Pratt (July 12, 1892—June 6, 1944) was the assistant division commander (ADC) of the 101st and was in the lead glider that flew into France that landed behind the lines for the invasion.  The plane crashed and General Pratt died of a broken neck. He was the highest-ranking officer killed on D-Day.

The museum had jeeps, planes, artifacts, but the most chilling were items confiscated from Hitler’s “Eagles Nest” retreat by soldiers. We were especially terrified by Hitler’s walking cane, and by items belonging to Herman Goering. World War II was still alive in our parents’ generation and we had books about submarines and tanks and battles.  We played “army” almost every day. It was always a battle between good and evil. Hitler and Goering represented to us the equivalent of the Devil we heard about at church. Third graders don’t have many subtleties.

I remember looking at the iconic black and white photograph of General Eisenhauer inspecting the troops before they headed out into a mission where many would not return and they knew it. My boyhood included the movie “The Longest Day,” which also turned out to be the longest movie, but it fascinated me even in middle school.  I didn’t know that John Wayne, Henry Fonda, and Red Buttons were not at Omaha Beach.

In these last few days, though, these memories have surfaced again. Memories of history and a moment of such import that all that came after was defined by it. And it rested on the shoulders of farm boys from Kansas and small-town kids from Alabama and North Carolina fighting and dying next to a Jewish kid from Brooklyn. Whatever had brought them to this moment, this had to be done, in the hopes that perhaps it would never happen again.

A new and better world was possible after that day, in part because those who endured it came home with terrible memories of the cost of war and human folly. They were builders who never forgot how bad things could be. In my church, they are gone now–Neil and Otis and “Hack” and Gordon and Buell and many others–who were different because of that war. It was not a good thing they had to do.  It was a hard and terrible thing. But if they didn’t, what followed would be far worse.  And then they worked hard for a better world if they came home.

It has been seventy-five years. I wasn’t even alive when it happened. But it feels every anniversary as though I were. And in a real sense, we all were. It was a moment when being an American, for just a while, was clear to everyone. Our nation had a sense of destiny in the world, one that we have sadly lost sight of in recent years. That destiny was clarified in the faces of men and women who humbly went about a terrible inevitability, did what had to be done, and went home.  In many cases, they never spoke of it much, but they never forgot what they saw.

I feel as though every one of those brave men gave something irreplaceable to us. It shaped my childhood forever. Every time we’d see one of those soldiers jump out of a plane at Fort Campbell, I saw them as heroes, saving the world from Nazis. I hope when all of them are gone we will not let the memories fade away. Only historical memory can protect us from stupidity and self-destruction. Maybe it could start with occasional silence in the presence of the dead, to remember history not with our filters of convenient hindsight, but with a humble acknowledgment of how hard the urgent moment can be.  Life doesn’t ask it often, sometimes only once, but there come those times when we are called upon to put ourselves aside for something larger than us all. That’s worth remembering.