Without the internet, there would be no Justin Bieber, no way to spread our urban legends so quickly, and no way to keep up with the Kardashian-ization of civilization.  Wednesday Yahoo news had among its usual stories a new turn on the “Man bites dog” archetype.  “Man is accidentally shot by his own dog.”

Apparently, a 46 year old man in Brigham City, Utah “got a behind-full of birdshot courtesy of his loyal canine companion when he was out duck hunting over the weekend.”  He and the dog were traveling in a boat and the man stepped into a marsh to set up some decoys.   His 12-gauge shotgun was unattended across the bow of the boat.  According to the police report, the dog was excited to join his owner in the marsh, jumped on the bow where the gun was and somehow caused the gun to discharge.  The shot hit the man in the buttocks with 27 pellets of birdshot.  He called 911 and was taken in and said pellets removed, along with his dignity.

I thought this had to be fictional, but sure enough, there was a news report on the web.  Of course, it could be that news

sites are fake, too, or unless television news stations get their news from…the web?  Where will this end?

I can see a televised trial coming. Since I have so recently written of the virtues of dogs, I feel compelled to defend this as an accident.   I can imagine that postal workers, newspaper boys, joggers and burglars will come forward to claim that this dog has a history of hostility.  He will have to hire a lawyer, hopefully a firm with a name like, “Shepherd, Barker and Chow.”

I would suggest that they offer the following defense

1.  Most of the prior victims deserved it, since they could usually be demonstrated to have legitimately terrorized the dog–i.e, invading his turf daily, throwing papers on the yard, bringing bills and junk mail to the Master’s door daily with the authority of government, and in the cases of the burglars, breaking and entering.  He was just doing his job.
2.  “Accidental” shooting is not a crime.  The dog was excited and happy and wanted to play with his stupid master.  I would subpoena former Vice President Dick Cheney for the defense.  He didn’t know how guns worked either.  Cheney, a supposedly more educated human, shot his friend in the face, while the canine only put pellets in the owner’s buttocks.

3.  There is no other motive, i.e., insurance fraud from recently changed life insurance.  To date, only humans kill for money.

4.  The man lives in Utah.  Strange things happen there, Alabama, Mississippi and Florida, and so there is simply a geographical inevitability about this.

5.  Investigators might want to look at allegations that the entire matter was staged by the owner.  Initial investigative interviews indicate that he had also claimed that his dog ate his homework at age 9, 11 and 14, and that he claimed that his dog was driving the car when police stopped him at 21.  Further investigation showed that he had been reported by his dog for abuse when the dog said his Master had beaten him repeatedly with rolled up newspapers.

Friends, if the animal world gets social media, we may come to see that “Babe” was not as far-fetched as first appeared.  Payback is apt to be miserable. 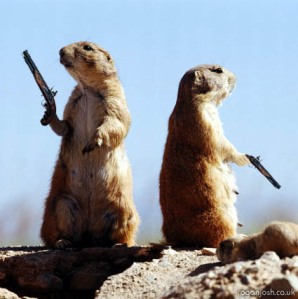 3 thoughts on “Dog Shoots Man–and so it begins”