How do you measure a life?  Gene Bartow is a legend now, having passed long ago from active coaching to the place where no one else can reach you—retired success.  But since he passed away, Birmingham, Memphis and the college basketball world have been filled with remembering.  He is a college basketball Hall of Fame coach who coached 1000 games in his career.  He finished with a 647-353 record over 34-seasons.  He [i]was a success at Memphis State, leading the Tigers to a remarkable championship game appearance in 1973, where they lost to UCLA and John Wooden.  He was national coach of the year that year.   In all, his teams appeared in the NCAA tournament 14 times.[ii]

He is too often only remembered in the national press for one thing– for a time when he was successful but it wasn’t enough.  He was chosen to succeed the legendary John Wooden at UCLA, the greatest coach of all time, who had a reign of ten titles in twelve seasons, the tenth in his retiring year, and seven in a row during that time.

So in 1975 Gene Bartow came to UCLA to replace the legendary Wooden when he retired.  He stayed only two turbulent years.  He was 52-9 record and took them to the NCAA tournament both years and was in the Final Four one of those.  But it wasn’t good enough.  The Washington Post quotes one of his players, Marques Johnson from that team.  “He was a

sensitive person,” Johnson said in an interview. “He was used to being totally embraced as a coach and a person, and he was just not ready for the kind of vitriol thrown at him when he took Coach Wooden’s place. He never came to grips with it, and it bothered him more than anything.  After two years, he was gaunt and pale, and he refused to read the Los Angeles newspapers or listen to the radio because there was so much negativity. But he was a wonderful human being, a super nice guy and a great coach.”[iii]

As a coach, Gene Bartow touched the edge of the big prize twice, but never won it all.  He left the dream job that became a nightmare.  He decided instead to come to Birmingham, Alabama and help build an athletic program and basketball team for a then-fledgling university at UAB.  He did reach great success, including seven NCAA tournament appearances.  But he never won the “big dance,” as they say.

But another event, the dramatic run to the edge of a championship with the Memphis Tigers in 1973, may have been his real greatest moment.  “I don’t think this community ever had better race relations than when Gene coached at Memphis,” a friend said.  “He had the way of bringing everybody together to support his team and the entire university.”[iv]  It hadn’t been long since the painful memory of the assassination of Dr. Martin Luther King, Jr.  Times were tense in the entire country.  Then the city of Memphis was unified for a time around the glorious run of a Cinderella team that almost did it.

They lost, as I mentioned, in the championship game, to the juggernaut UCLA, coached by Wooden and led by future

NBA stars Bill Walton and Keith Wilkes.  So his highest career points were two Final Fours, a lot of tournaments, being the sacrificial lamb at UCLA, and then to rebuilding himself as well as building UAB in Birmingham.

So how do you measure a life?  While we’re measuring, it might also be worth mentioning that he ended his life with the nickname, “Clean Gene,” a moniker few carry in college sports these days of rogue fans, agents and corruption, for the way he ran things.  He gave a race-divided city in Memphis something else to rally around and focus on in a painful historical moment.  He started a great program in the city where we live that has had some really great moments.  He battled stomach cancer to the very end with humor and grace.

I think it is fitting that Gene Bartow passed from this earth in the time in which one weekend carried the UAB-Memphis game and will be followed next weekend by Martin Luther King day.  I’d say, all in all, he did the right things.  The rest is just wins and losses.

It always matters how you play the game.  John Wooden and Gene Bartow would agree, and maybe now they get to talk about it.  All the rest is just wins and losses and what other people think.   Rest in Peace, Coach.  You went out on top. 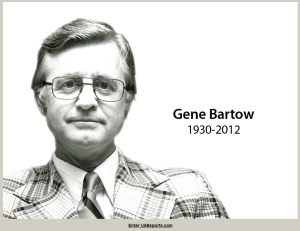