A young preacher gets some off-Broadway theological lessons from Elmer, Pappy-in-Law, Dooley, Scotty and Hangy Limb and the rest of the Bridge Crew. It wasn&apos;t accredited but if made a permanent impression to supplement the book study.Song: "Working On a Building" by Shades Mountain Air Support the show
Follow The Flatpickin' Pilgrim's Progress on WordPress.com

If we learn to look at life with the eyes of the artist, we

will see an entire universe that is “a gift of mercy.”

It’s odd that a musical preacher who writes songs, cut his teeth and got called to ministry during the Jesus Movement of the 1970s would have met Pat Terry so late in life, but that’s the way life winds sometimes.  I had heard of the Pat Terry group back when he was starting out—Pat is just a bit older than me.  I heard his songs, but my musical journey got put on hold for a long time as marriage and children and years in graduate education and pastoral ministry took me in different directions.  I continued listening to music and playing and singing, sometimes in church and mostly by myself for my own pleasure.

Pat Terry, meanwhile, was on a journey of his own, too.  After many years, first in the very spontaneous and joyful Jesus Movement musical world, and then for a while in the increasingly industry-captivated contemporary Christian musical world, he moved on.  He had a good, long run as a commercial songwriter in Nashville, with a string of songs for many well-known artists like John Anderson, Travis Tritt, Kenny Chesney, Alan Jackson, Tanya Tucker and the Oak Ridge Boys.  He learned the Nashville craft and all the while continuing his own inner journey of writing from the heart.

So it was that a few years ago, Greg Womble, my friend and bandmate who plays the banjo publicly, and I, who play it out of earshot but love it, went to Atlanta to hear the great Earl Scruggs.  The legendary picker died not too long after that quick trip to hear our hero, but one of the unexpected gifts of that trip was that Pat opened for Earl.  I heard the songs of a mature musical master, one after the other, bought his CD and came home determined that I wanted to get to know Pat better.  We got “introduced” via email by a mutual friend, Johnny Pierce, editor of Baptists Today, who did an article on Pat’s musical journey.  We corresponded and finally I invited Pat over to do a songwriter workshop with our local NSAI (Nashville Songwriters Association International) chapter, of which at that time I was the Coordinator.

That workshop was a hit with the writers,  and this year I invited Pat back.  We scheduled to do a concert Saturday evening at the Moonlight on the Mountain venue here, a place where the best songwriters in the country perform every week.  We were joined by Janet Hall, a local news anchor who is a fine songwriter and performer.  The weekend was a great time for us all.  His workshop was a marvel as he took us through the genesis and development of one of his own songs.  We saw a master at work, the care and stewardship of words and sound.

Great art is a devotion to faithfulness and integrity.  Artists, genuine ones, do what they do because they have to do it, not because of money or being known or even, as it most always was when many of us started out, because girls or boys are drawn to us.  If it’s in you to write, or sing or paint or make pottery or any artistic longing, you have to keep doing it.  Not only because it’s “who you are,” but because there is something you love to be found there.  Truth is its own reward, and great art is paying homage to living truth.  You listen to creation, hear something, and try to write it down as faithfully and honestly as possible. 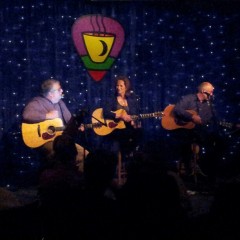 Pat is a master artisan.  It was an honor to spend a few days watching him at work, enjoying his songs, and learning, along with others, how to be more able in our own craft.  Sunday he sang in our worship, opening with a fine song called, “Come As You Are.”  But the phrase haunting me most since the weekend was a song Pat did Saturday night called, “The Gft of Mercy.”  It’s a song about a man who having failed his life in so many ways marvels at love that stands by him when he deserved far less.  The chorus says,

It was a gift of mercy,

And if I ever get to heaven,

That’s a truth for a lot more than a repentant criminal on a cross.  If we learn to look at life with the eyes of the artist, we will see an entire universe that is “a gift of mercy.”

Pat Terry’s website lists his discography and who has covered his songs in Nashville   http://www.patterryonline.com/