This is the sermon I preached this morning, Christmas Day 2016, at 10 am at Vestavia Hills Baptist Church, Birmingham, Alabama. Merry Christmas to all!

NRS John 1:. 14 And the Word became flesh and lived among us, and we have seen his glory, the glory as of a father’s only son, full of grace and truth.

My nephew Aaron is a college student, all grown up and mature now, but when he was seven years old my sister Amy and her two boys accompanied her husband Chris on a business trip.  On the way they incorporated a little vacation and stopped in Los Vegas.  They went to the Hilton Hotel, which houses the world famous STAR TREK: THE EXPERIENCE

STAR TREK: The Experience is an interactive adventure based on the voyages of the most exciting futuristic television series of all time — Star Trek. Visitors are immersed in a futuristic world where they see, feel, and live the 24th century!

They walked in and her little boys were absolutely overwhelmed.  They hadn’t been there long when a huge man dressed as a Klingon came walking up.  Now, I’m not a Star Trek fan, but many people 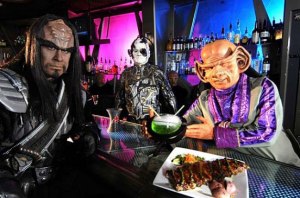 are.  Vickie never would permit us to watch anything on the television at our house involving mutants or creatures with things on their foreheads with our girls in the house, so I always waited until after bedtime to watch aliens and zombies and such.  Take my word for it, though, a Klingon is an alien who looks pretty weird.

So anyway, this guy comes walking up, he’s about seven feet tall with elevator platform boots on to make him taller and got that “rainy day mutant” look on his face, and he bends over to my terrified little nephews and says, “Where are YOU from, little boy?”  And Aaron’s trembling mouth drops open and he replies, “Earth!”

I sympathize.  I have the same reaction when I think about Jesus arriving here.  It’s such a strange concept.  Star Trek has created a whole universe out of our fascination with what’s “out there.”  The original series began with the phrase describing the Starship Enterprise as “where no man has ever gone before.”

The captain and crew explore the universe, encounter aliens, have adventures and fight wars.  But along the way they also explore a lot of important themes.  I looked on the Official Star Trek Website while I prepared this sermon because I had forgotten about the Klingons and wanted to refresh myself.  I came across this official Frequently Asked Question:

Here was their answer:

It was later revealed that a certain humanoid species “seeded” different planets in the galaxy with their DNA, thus solving the mystery of similar species.

So from a production standpoint, we had to have aliens so the guys playing them could breathe through the masks.  However, the loftier notion was the deep intuition that somehow, “We are all the same out there.”

We hope, somehow, that the Universe is finally not a cold, dead, empty lifeless hostile place full of creatures like us who want to wipe us out.  So what is it?

Science fiction is about the search for life and for meaning.  Christianity’s answer is in reverse.  We do not have to go “out there.”  God has come here.

This may sound simple, and the ways we talk about it in the church somehow over-simplify it.  The fact is, the church spent its first 500 years struggling to understand who Jesus was and what it is that he did in being born.  But in short it is this:  Holy God and sinful creation are not easily brought back together. Something is amiss, and the different religions call it different things—ignorance, sin, alienation, separation.

That sounds quaint now, because we are in the process of doing away with sin.  We have replaced it with acceptance and evolving.  Everything is beautiful in its own way, and all of that.  It’s hard to comprehend evil with such a philosophy, though.  Those dark corners of the soul that don’t wash out with therapy, hard work or adequate funding.  Something more radical and invasive is needed to turn the tide.

For Christians that something more is the incarnation of Christ.  We put it in pretty simple terms.  God has come to us, and is with us.

But we still struggle to grasp this reality.  I once was sitting in a restaurant many years ago with Vickie and overheard a group of ministers behind me at another booth.  They, too were in the middle of preparing for Christmas through the Advent season at their church.  One of them sighed and said, “I sure am glad Jesus only comes once a year.”

As much as we celebrate the Incarnation, we still tend to push it back into history or over into a corner of the year or, worse, into one part of ourselves.  So here’s the awesome reality.  God didn’t SEND Jesus, as one writer put it, God came to us in Christ.  Somehow, two things that cannot be brought together came together.  God came to us, accessible, knowable, personal.  God was still God.  The bridge had been built.  But it didn’t go out into outer space, or forward into some inevitable self-improvement through evolution.

Neither did Jesus come to simply say, “I’m ok, you’re ok, we’re all ok and that’s ok.”  You don’t get crucified in a world that’s ok.  We’re desperately in need of an energy we don’t have, a vision we can’t quite attain, and healing we cannot effect within ourselves.

And whenever the church starts to lose its way, the first truth endangered is the incarnation.  We struggle with something that flies in the face of our comfort in the world, our acceptance in the culture, and even our blessing of ourselves.  This truth challenges everything we want to believe and asserts everything we seek to deny.  The light shines in the darkness, but that is not always a good thing.

That searching light peers, deep behind our masks and costumes, to the truth about us, the truth that few if any know, and exposes it to the day.  Incarnation is trouble if there ever was trouble.  It is God refusing to mind his own business.  It is God getting involved at the point where we can’t jet back to earth and be left alone.  God doesn’t work that way.  It’s not God “out there” for those bold enough to go look for him.         The essence of sin is to be left alone.  Think of all the ways people shrink back from truth, from healing, from light.  We withdraw, we escape, we anesthetize ourselves with work, booze, drugs, sex, or just disconnect emotionally from life.  In a thousand ways we know how to run away, to go through the motions instead of living life.  But to get well you have to learn how to really be present in your life—present to all of it.  That includes the unpleasant as well as the pleasurable, the difficult as well as the easy.  To be fully present is to be aware of all that our life gives us.

If Star Trek invites us to “journey where no man has ever gone before,” the incarnation is about God being willing to journey “where we’d just as soon no one ever go.”

So here is your challenge.  Is there some place in your life where you are afraid to go?  Some brokenness from long ago that you simply patched over?  Someone you need to forgive and just can’t?  Some wound so deep it makes you sick to even think about it?

Is there a character flaw you have that, try as you might, you cannot overcome?  A call that you never answered?  A confession you need to make?

You’d rather just let it go.  It hurts to go there.  And you don’t really have to power to do anything about it anyway.  And this is where incarnation makes the difference.

The 4th century bishop Athanasius said in a famous essay called “On the Incarnation,”

Some may ask, Why did he not manifest himself by means of other and nobler parts of creation such as sun or moon or stars or fire or air, instead of mere man? The answer is this: the Lord did not come to make a display. He came to heal and to teach suffering people. For one who wanted to make a display, the thing would have been just to appear and dazzle the beholders. But for him who came to heal and to teach, the way was not merely to dwell here but to put himself at the disposal of those who needed him.

The place you need to dare to go is one where you really can’t go alone.  He’ll go with you.  That’s why he came.

Philip Yancey told of dining with a group of prominent Christian writers when the conversation turned to letters they got from readers. Richard Foster and Eugene Peterson mentioned an intense young man who had been seeking spiritual direction from both of them. They responded as best they could, answering questions by mail and recommending books on spirituality.

Foster had just learned that the same inquirer had also contacted Henri Nouwen. “You won’t believe what Nouwen did,” he said. “He invited this stranger to live with him for a month so he could mentor him in person.”

That’s the difference between appearance and incarnation.  Christ came to put himself at the disposal of those who needed him.  The question is, will we answer his invitation to come and live with him so he can mentor us in person?

It will require an answer, this invitation.  You must choose whether to accept that you need his help or not    It is an humbling truth, this.  To look up and answer, when asked where you are from, “Earth.”

Earth, full of sorrow and decay and death and sin, but also of promise from God that even in this place of tears and struggle, the power to become the sons and daughters of God is now among us. And it is to, as the Apostle Paul put it in Colossians 3:16. “16 Let the word of Christ dwell in you richly, teaching and admonishing one another in all wisdom, singing psalms and hymns and spiritual songs, with thankfulness in your hearts to God.”

Some word is going to dwell in us—words of hopelessness and the spiral or death, or words of life. His word is life, and it dwells with us—faith hope and love. It lives out in the flesh, building bridges to others, building love where there is Hate, reconciliation where there is anger and misunderstanding. It packs food for the hungry and the foodbank. It clothes the naked and visits the prisoner. It gives to the poor and speaks for those who have lost their voice. It confronts darkness with light. It challenges the oppressor. It tends to the wounded.

The word became flesh and dwelt among us, full of grace and truth. But the word also DWELLS among us, becoming grace and truth. Listen to the words. Put them in you, let the story and the stories and the teachings and Spirit speak, and start tending your mind and heart and soul. And life will spring up, even on a place that was as desolate to you as a Klingon desert. And you will find yourself feeling hope and peace and a thousand good gifts. Merry Christmas, and may the Word of God dwell within and among and all through you this season.

LISTEN: Gary’s recording of his original song, “This Christmas Eve” download for $1.29