Having a hip daughter who lives in New York is the greatest.  I am all up on the latest things without having to actually keep up with them.  Whenever Kate comes home, a few weeks introduces me to what’s going on out there when in fact I lost touch years ago and became a late-middle ager well out of touch.  I wrote a song on my first CD called, “Cold, Old Middle” with a pretty descriptive 50-something line in it:

He’s not as sure he once was

Rides around and pitches fits.

One day it occurs to him—he’s officially out of it.”

Today Kate was telling me about “humblebrags,” an invention of a comedian named Harris Wittels, somewhere out there.  He tracks narcisstic “Twits” out there on Twitter.  Twitter, for those of you my age, is sort of a Haiku Digest of social media.  People don’t write—they “Tweet.”  A Tweet is, according to the Twitter official website, “made up of 140-character messages called Tweets. It’s a new and easy way to discover the latest news (“what’s happening”) related to subjects you care about.”

Problem is, a lot of Twerps, Twits and Twaddlers mistake their lives for Tweetable substance.  Lots of people find it very useful, entertaining and helpful to actually follow useful matters for themselves, but one thing about human nature is always true—we can always manage to make it about us.

So, “humblebrags” are statements that manage to feign humility while asserting self-importance.  It’s an art, I must admit.  I once told President Carter when I was sitting with him that being humble was one of the great challenges of life, but I think I’m up for it.  I am content to know that humility is one of the things that make me the great guy I am.  (See?  That’s a humblebrag).  Here are a few from a website called, “The Top 50 Humblebrags.”  I blocked the Twits names to protect them from further damage than they’ve already done to themselves, except for Khloe Kardashian.  I mean, all the damage that could be done has already been inflicted on that family BY that family.  They need a monastery.  Click and take a look. 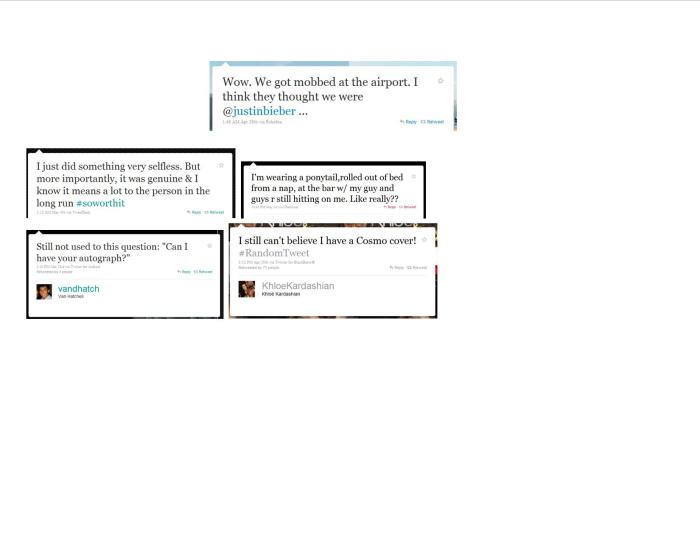 So you see what I mean.  Even Rick Warren had one.  “I’m truly humbled you follow my Tweets.  I pray they strengthen your life and bless your ministry.  God bless all 200,000 of you.”  Sigh.  I’m not sure I have even typed 200,000 WORDS in my lifetime, much less had them read.    I mean, my two books and several dozen scholarly articles…Rats!  Sorry.

So I got to thinking about this article I read on Associated Baptist Press about a preacher named Scott Lawson who spoke at a conference in California, and said this:

The word predestined means the destination is determined before the journey begins,” Lawson said.   Predestination means that God has marked out on the horizon of time the destination by which he is bringing all of human history to an appointed end, and God has predetermined and pre-scripted everything that would come to pass.”

Lawson said there is “nothing harsh or offensive” about the doctrine of predestination, but it is rather “God exalting,” “joy producing” and “humbling.”

“If salvation begins with me, if it is initiated by me, if it is within myself to be able to believe unaided by God, then I should pat myself on the back and share some of the praise with God and take some for myself,” he said. “But if I understand that it is all of God — that before time began God chose me and set his heart upon me and put into motion by his Son and by his Spirit all that would be necessary to bring me to himself and bring me to glory — then all praise and all glory goes to God.”

Oops!  There we go again.  Scott, I agree with you that what God has done is ineffable, glorious, wondrous and undeserved.  But I keep running aground when the humility starts oozing.  “It’s all about God, nothing of me.  It’s just humbling that of all the people in the world, God chose me.  I didn’t deserve it, but , well, here I am.”  By the way, Scott added, the rest of the sorry lot out here (the rest of us) was marked damaged and consigned to the bargain bin from all eternity.  Nothing personal.  After all, we know this, because those of us who understand the way the Universe works know things that others can’t know.

Reminds me of that story of the rabbi who saw one of the most notorious sinners in the community wailing down front by himself in the synagogue one day.  “Oh, Lord, I have done so badly with my life.  How can you ever forgive me?  I am the worst sinner ever!”  The Rabbi says, “Huh!  Look who thinks HE’s the worst sinner ever…”