My kids are headed our way from NY for the holiday, but had the sadness of the death of their beloved dog, Mara. Mara had lived a good, long life, and like any family pet, had the run of the house. When our oldest granddaughter was born in Seattle five years ago, I was given the couch as my sleeping quarters, and she slept next to me on the floor, licking my hand regularly through the night, which, if not a regular experience, is a bit of a start for a sleeping person. Burglar or beloved, a licked hand is terrifying.

Eventually over those happy days we became friends and I would return the greeting in my sleep with a perfunctory half dozen strokes. These creatures who live with us accompany us in life, become part of the furniture of our homes. We miss them when they are gone.

It was time, as that time always comes, and Mara had no regrets. I reminded my daughter that marah could be taken as the Hebrew word for “bitter,” but Mara seemed remarkably sanguine toward the discomforts and outrageous fortunes of human beings and their ways. And she had it good–her own facebook page as Mara D Dhogg, the run of the house, better medical care than any except Congress, and the chance to live in six states and Canada. You could
do worse. And, like all fortunate pets, she was loved.

I think about this as I see how poorly we humans do with one another. Love is good, the best of all things. Kindness to one another is never lost, nor to our fellow creatures. To love God’s creation is also a door into eternity, I would think. Rest in peace, Mara Dhogg, and all loved pets everywhere.

A few years back, I posted a piece on here that was picked up by a few online magazines and papers. I only got one cranky comment from a Christian fundamentalist in Georgia who chided me for caring about pets and not about my neighbor’s salvation. How he knew my neighbor and my inner motives, I do not know but I long ago stopped pondering the mystery of other humans’ absolute knowledge of the rest of us. I am rerunning it here to remind me of hope, even for the creatures, that a God of love might mean.

Here is the original post, “Do Dogs Go to Heaven?’ I posted in in November 2011.  If you have a theological argument with me, I would direct you to http://www.idontreallywanttoknow.com

While we were away for Thanksgiving with our two daughters who live in New York, our middle daughter, Erin, called with the drastic news that her 13 1/2 year old white lab, whom she named Hannah Marie Furr-Yeager (any other dogs with hyphenated names?), passed away from kidney failure.  Her husband just called her, , “Good Girl”.   She got Hannah as a pup when Erin was 19 years old.  Erin wrote on facebook,

“She was the “mascot” of our entire group of friends in our 20’s. She has been with me through college, roommates, first job, first love, heart break, job loss, first home, success, failure, marriage and all of life’s “in betweens”. .. Always there….always letting me know she was present. She was always waiting on us just to call her so she could be there. She got so much joy just from being with us.”

I have found myself quite moved by the depth of love my daughter has for Hannah, and for the intensity of grief that has followed.  It caused me to ask the old question, “Do dogs go to heaven?”  This is not a question I have spent time on before, and I must say, it indicates a deep deficiency in my theology.  As I read about this online I came upon a variety of opinions, one on a website that also had articles like, “Is Smoking Cigarettes A Sin?” ” What Do Christians Believe About Dinosaurs?” and “Does The Bible say What the Devil Looks Like?”  Not too promising, if you ask me.

I don’t intend to belabor the subject except to reflect that perhaps, “Do dogs go to heaven?” is the wrong question.  The right question is, “Does God the Creator love the creation?”  The answer is unequivocal.  God is not simply redeeming a handful of lifeboat survivors but is renewing creation itself (Romans 8 treats this in extended fashion).  The power of life that creates what we call “heaven” is in fact resurrection, the power of God to raise life from death and “re-create” creation.  So, it seems to me, that if heaven is not “a place way out there” separate from creation but is, instead, God’s merciful and loving Providence, then it is not impossible at all to imagine that God, who remembers all things, is able to bring all those joyful complexities of creation to new life.  The Bible talks about the end of “tooth and claw” nature, where Lion and Lamb lie together and the child plays safely near the adder.

These visionary imaginations of the prophets remind us to be respectful and humble about what the Creator can or will do at the end of all things.  God’s love and greatness are vast.  The answer to my question, “Does God love the creation?” is “Of course.”  Trust in the love of your Creator.

I love the old story on “The Twilight Zone,” called “The Hunt,” about an old man and his beloved hound who drown during a coon hunt and wind up on a road where they must choose heaven or hell.  The old man was played by Arthur Hunnicutt, the crusty Arkansas native who often played outdoorsy types.  The screenplay was written by Earl Hamner, later the creator of “The Waltons” series.  Ultimately, it is his dog Rip who helps him make the right choice.  My favorite line:  The angel says, “You see Mr. Simpson, a man, well, he’ll walk right into Hell with both eyes open. But even the Devil can’t fool a dog!”

For those of us who live so detached from nature, feeding from its bounty but unaware of the connection, it is a good reminder to us of our own creaturehood.  We are not so different from our pets and not so lofty in our uniqueness that we can act as though we are not sharing creaturehood with them.

Hannah Marie was a wonderful pet.  I told Erin, “I have buried a lot of humans who weren’t loved as much in life, missed so much in death or commemorated so deeply by her survivors, as Hannah.”  And I might add, “They hadn’t done nearly as much to offer loyalty, devotion and comfort to those in their life.”  I’d side with those who think dogs will be there, myself.   Given the way we treat one another, I’d think it would be the dogs who should be asking the question about us.  Given a choice of hanging out with Hannah or a lot of humans I’ve met through the years, it’s no contest who would be more fit for eternal happiness without a major overhaul. 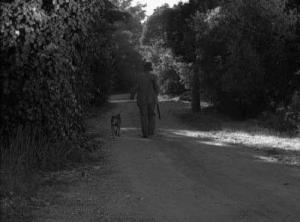 4 thoughts on “In Memory of a Dhogg”